Report of the activities held at KDM, on February 13th, 2014

18 kids of the Yellow class

Sara introduced herself, Susanne, Benedetta and Mara; subsequently she asked the children if they could guess where they are from.

The kids had fun and were participative, while trying to guess the Countries.

First, Sara did the movements/rhythms.

Then the children stood in a circle taking turns in clapping rhythms/noises/movements.

The rest of the children followed.

The kids were a bit shy, but all of them made a movement/sound. They seemed to enjoy it.

The children stood in a circle; they threw a ball to each other and they said their own name loudly; then they threw the ball to a friend and say his/her name loudly.

4) Music without or with emotion

All the kids looked at Sara.

Comments from the kids:

• De and R: the way of playing is different

• A: it sounds like different music because of the different ways of playing it

5) Looking at body/face Sara while she plays with expression:

• Ti: It looks like Sara enjoys the music. Eyes are closed

• Ri: Sara's emotion shows the mood of the music. During 1st way there were no movement.

6) Talking without or with emotion

Listened again to the 2 ways of speaking

Question: is the only sound of the music important?

All agreed that body language, facial expression and closeness/distance to another person are very important while communicating

• The rest of the kids preferred the 2nd version

We get important information in our communication through emotions.

(90% of our communication is non-verbal)

Mara showed an example of communication without using words.

She rubbed her belly and she looked a bit sad.

• De: Mara is sad because she is hungry

Kids can give example of non verbal communication

• A: looks angry, slaps her fist

• Em: A is very angry with someone, wants to slap him

• De: A wants to fight with someone

They enjoyed while doing it very much. But, especially the boys, seemed to lose control fast and pretend to fight roughly with each other.

Material: scrap paper made into a ball

The children stood in a circle, a little less than the length of an arm apart.

They hit the ball with the palm of their hands in order to pass it throughout the circle as many times as possible.  The group counted out loudly every time the ball was hit.  The goal was to get to the highest possible number.

The kids loved this game.

Children sat in groups of 2 and 3 members each and they communicated using only their hands.

They had a lot of fun while carrying out this activity and they did their best to convey their story to their mate(s). They were very focused.

• Sy and Ti had a fluent conversation and they joked around. They had a lot of fun while doing the exercise.

• E, Ri, De and A were in 2 different groups but they sat so close that they seemed to be only one group

• Em, A: made significant gestures, they seemed to have made up a big story

• D: talked about how happy she is to buy a balloon

They had a good time but they said it's easier to write on a computer.

• Ti and Sy were saying that they are hungry, but it's not lunchtime yet.

• Sa and Susanne: talked about their hobbies/things they like: playing the piano and the violin; moreover they like singing. They were also thirsty.

Most of the attempts ended up in foot fighting

• Sa: cycling with her friend

• Ti: walking together with her friend

• Benedetta and J: J seemed shy, she made small movements

• De and A: sang to each other

They acted out the following scenes, and then the kids were asked about the emotions they felt. (Also body language)

Person 1:"I am wearing this T-shirt today"

Person 1:"He/she was smiling at me"

Explanation: the information we get through emotions sometimes is different from the words we pronounce. It is important to understand the meaning of emotions as well as the meaning of words.

• Em: Nancy is happy for So because someone has smiled at him. You can see this because Nancy smiled.

• J: Nancy looked surprised that So was wearing the t-shirt

Kids were very cooperative and seemed to have fun.

D held her distance (sat apart from the group) at the beginning of the session. Subsequently, she got more involved, but didn't say much.

Em was fighting with two of the boys during the break. The first accidentally bumped into her and she responded by punching and she kept on chasing him. She also punched the 2nd boy for some reason and she spoke violently to him. During each session, she has been very active in responding to questions.

Posted by Prof. Sara Michieletto at 1:13 AM 0 comments

Posted by Prof. Sara Michieletto at 6:47 AM 0 comments

Today we started with the new series of workshops at Kdm and met again the kids.
It was touching and beautiful to see and hug them.
Soon we will publish the report.
Posted by Prof. Sara Michieletto at 6:36 AM 0 comments

From Times of Oman 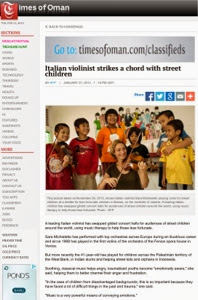 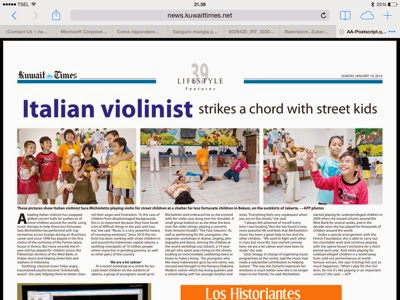