Kids: 12 kids of the Yellow class

- Sheets and pens and colors (Natalia)

- A ball/something funny to throw (Nancy)

•
Ask them to draw the faces according to their actual mood

•
Teach them the new song:

This is a way to teach them a wider vocabulary to express themselves.

The kids were a bit confused; they said: “it's difficult to follow.”

(But at the end they very much liked the song).

We then taught them how to breathe together.

• quick Introduction of Christy quickly, and then she started playing Bach Bouree I and II.

Christy introduced herself and the kids askedquestions.

Everybody listened very carefully while Christy was playing. They observed every movement.

During the question round, they asked her many questions, from “how long she’s been practicing” to“how old she is” and “how long her education takes.”

Question: how violin and cello are different?

All kids were genuinely interested and they made remarks while asking questions.

Christy, played Bach a second time, and thekids had to write/draw what they thought she was feeling.

All of them agreed there are parts in the music that are happy, sad, or even a bit scary.

Christy played again and the kids had to try to distract her from her playing, but she had to continue.

In first place the kids were a bit shy, they didn't really know what to do.

After a few minutes, especially when thier teacher Uli started to play too,  they started to have more fun, they moved in a circle around Christy in order to make funny faces. But they still looked awkward.

E and Al hid behind the tables, they didn't want to join.

Sara played the song “Beautiful - Cherry Bell”, orJangan Menyerah, and subsequently she mademistakes, she apologized, and then we asked:“what is Sara feeling?”

(Ashamed, blamed, embarrassed, angry on myself)

And “what will she feel if she plays well and you all enjoy the music?

Kids observed carefully, they had fun to guess the feeling.

• One of the self-conscious feelings on the banner has been picked and they made a drama on something that happened to them.

We tried to divide them in three groups of 4 kids.

E and L are a couple. Al comes in and chats. De throws stuff at E and L and he starts teasing them.

Show: feeling special (boy/girlfriend), confused (who's throwing things at them)

Ar, Di and T are the audience. Jolande is a pianist, but while she is playing the kids shouted and covered their ears. Jolande walked away embarrassed.

Sy and N sat on a bench

I and S checked the work they've done. Sy got a compliment, but N got shouted at.

They subsequently left, but I had forgot her phone.N took it and she hid it.

They checked Sy and N's pockets. N is very embarrassed.

Talked about shame, and that you can laugh at yourself

Sara shared an ashamed situation with them and she explained how she had coped.

She asked Natalia or Sotar if they wanted also to share.

Relax in circle: remembering the feeling of pride; Associate a gesture to that feeling; when you feel discouraged or humiliated, recover the gesture and feeling of that moment.

De: When during a soccer match he made a good shot he got a compliment

T: when they tease her she shouts

I: she's very welcoming, I remembered her name

Becky: likes playing with the little ones

The session today was very intense and at the same time cheerful and participated. 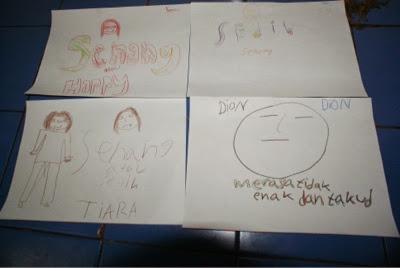 The kids were drawing the emotions that they saw on miss Christy's face, while she was playing Bach. 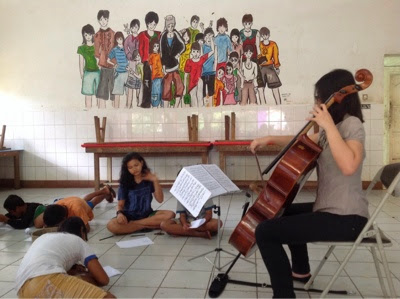 Video by UNTV on the project is online!

The video shooted by the United Nations television is online!
http://www.unmultimedia.org/tv/21stcentury/detail/3372855121001.html

Report of the activities held on March 6th, 2014 at KDM

Theme of the day: Emotions provoked by being either impolite or polite

Participants: 12 kids of the Yellow class

- 18 pieces of paper and pencils (Nancy)

- Nancy had to invent the choreography of the first part of the Qua qua Dance.

They liked the game, even though the "energy" level of the group was not high at the beginning of the session. Some of the kids appeared to be tired or worried.

Divide them in two groups and tell the first group to be impolite and the second group to be polite. Put the hat on the impolite kids.

Played music and walked pretending to be on the street; when music stopped they interacted with the closer person in their given way:

- Cannot hurt themselves or ruin things

- The polite persons will react politely

reminded them that this is just a game.

The first 2 attempts didn't work, it was a bit chaotic. At the third attempt, we made groups of 2 (one polite, one not), and that worked much better.

Then, they switched roles.

During the 4th attempt, we arranged the kids into 2 rows (they had to exchange roles being polite/impolite), this worked very well. Roles of the different characters were clearer to the kids.

There was a lot of touching: slapping/jokingly pushing

Mini Drama in pairs, exchanged roles from situation 1: one person polite, the other one impolite.

* Sat down, introduced Jolanda, and asked what they had felt while being both impolite and polite (irritation, anger, fear, revenge, sadness, depend on the person and on my mood, annoyed, bothered, disappointed)

What do we feel when people are not polite to us?

- Ek (paired with Di): He didn't like it when Di was teasing him. He was annoyed

- Em (paired with L): she became angry when Lmocked her

Then they were polite to each other. Some of the boys said that “polite” is boring.

- I (paired with Jolande) Jolande was trying to make friends with I. I didn't want to because she didn't know Jolande.

- U: got irritated with impolite people

- T: in the drama she got pushed into getting a nap. She didn't like it.

- Jolande: she was not happy. She doesn't like herself when she is impolite.

What emotion do they feel when they're impolite?

- Susanne: angry with other person and not happy with herself

- Sara: sad, but in beginning powerful

2 situations were written down:

Ibu U read and kids have to guess. They liked this game. A lot of cheering when they guessed correctly. Find below their writings.

On "ballo del qua qua" music, they had to follow Nancy doing impolite movements during the first part of the music, and they had to dance in pairs nicely on the second part.

C: danced together hooking their arms, rotating and swapping partner

The kids had a lot of fun. When the music went faster they had to laugh when they tried to keep up.

A game  in order to help teens to get to know one another.

The number of questions per participants was checked so it was for all the same. They tried to include questions about a favorite color, ideal vacation spot or future career choice, and cut each question out and then they were taped to a large ball. The group was asked to stand in a circle and then toss the ball to a member within the group. The group member should have answered one of the questions, thenremoved it from the ball and then tossed the ball to a new member. The process was repeated until everyone had answered a question.

They seemed to like this game. The only problem was that they read the questions before pick one. Next time we should stick questions so that they can't read them.

- U: What makes you scared? *Heights

- R: Where would you like to go on holiday? *Bali

- Ek: What work would you like to do in the future?*Farmer

- Di: What is your favourite smell? *Perfume

- T: What is your favourite colour? *Black

- Sy: What is your favourite sport? *Soccer

- L: What is your favourite animal? *cat

- I: What is special about her? * she can study well

- Em: Who is your favourite superhero? *batman

- Ar: What would you do when you were invisible for 1 day? *play at warnet

Sara then played the bumble-bee flight, by Rimsky-Korsakov, on her violin (but we didnt tell them the title of the music).

What did they feel when listening to the music?

- Em: stand in front of a cave. She is scared

- S: made a mistake, she is helped by someone but still scared

- U: stuck in traffic and in a hurry. When the music eases it's like having a break

- T: drowning in the sea

- Ek: in a train, the police is chasing him

- R: scary music. He plays at sea, he wants to swim but is scared of the waves

- Sy: climbs on a mountain and goes very fast down

Sara explained the theme of the day: polite/impolite

Sara explained with a smile that the music, “The Flight Of The Bumblebee” can be annoying as much as unpolite behaviours could be to us.

Dance in pairs: 1 bumblebee, one person. While Sara played the violin, the person chased the bumblebee and when the music stopped, the bumblebee dropped down.

They had a lot of fun with this exercise.

The kids were very particular in picking a colourpencil fro, colouring the emoticons and writing down stuff.

Some of them didn't want to take a pencil that I offered, but they wanted to pick another colour.`

Result of the Emoticons (how they were feeling at the beginning and then at the end of the workshop):

A: 1: smile (he only joined 1st part session, later exchanged with R)

•
Once, I met a bad person who bullied me. I felt like I should have taken my revenge, but Ididn’t want to.
•
Once my book fell down, a nice person who always helps me gave it to me.

•
I'm annoyed because I talk to that person who teased me off. The person was not nice andS/he was impatient. So I’m annoyed..
•
I’m happy because I can meet nice people when they say they understand. Good people like helping and respecting their friends.

•
One Sunday morning I met other children singers who beat me up.
•
One afternoon I met a man on the streets who gave me food.

•
Once, when I went home I didn’t have any money and someone gave me a lift in the car
•
A row in the classroom is dirty

•
When I met buskers and beggars they forcedme to give them money in the city bus
•
Once I met someone who needed help with the car when it suddenly had stopped in the middle of the road.

•
I met a nice person who shared nasi with me and my friends and other people who difficultly shares with others.
•
I met a very bad person. I was on the streets and that person had harassed me. I also met a bad person at KDM
•
Once, I met a good person, but I was only a bit happy because that person didn’t have a big temper. That person hit me, but not too hard.
•
Once I met a good person, and I helped him/her. He/she helped me in everything I did.

•
I met a nice person at KDM who helped me when my sandals were on top of the roof.
•
I met a bad person on the streets who annoyed me. That person hit me (with car/motor?) when I was walking on the street.

•
Once I met a bad person who stressed me out. That person liked hitting others. Every time I saw that person, I had ran away because I was afraid.
•
I met siblings when I was on the streets. It was fun to go out together.
Posted by Prof. Sara Michieletto at 9:32 AM 0 comments